Happy Wednesday, my peeps! As I said in MONDAY’S POST, we are currently mid house project here! I joked with my guys that it’s going to be our yearly tradition to start construction right after the first of the year. We are in the process of converting part of our 3rd garage into an office space for me. Adding on livable square footage is never a bad idea, so we are thrilled to add on this space. It’s tiny, but it’ll be super cute! I had a lot of requests to show the before. It’s always fun to see a space before it gets turned into something better! I will add this disclaimer…This post does not include pretty pictures…we renovated a KITCHEN a year ago, right after moving in, so this garage became our catch all, junk space. It was a disaster. Like SO BAD, as you’ll see in these photos. Thankfully, this project gave us the motivation to purge the space, donate/trash lots of items that weren’t being used and even unpack a few boxes still packed from when we renovated the kitchen. We put off organizing this space for over a year, so thankfully, it HAD to be done to proceed with this project and I feel lighter!

Here is a peek at the before…Don’t judge me… 🙂 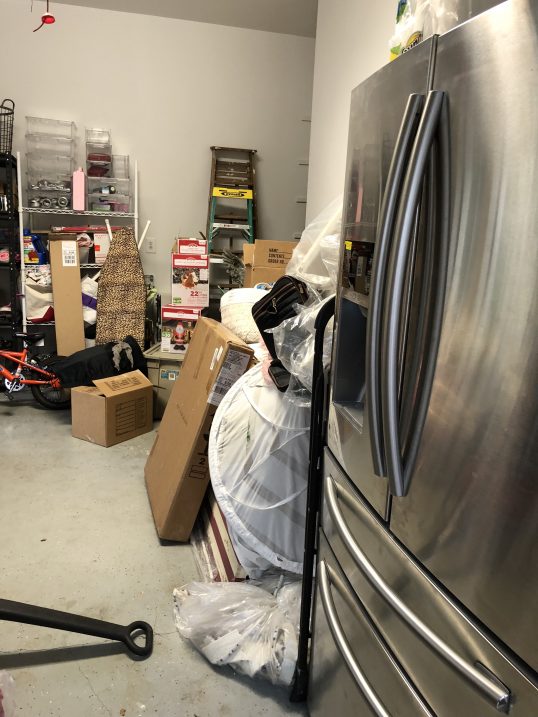 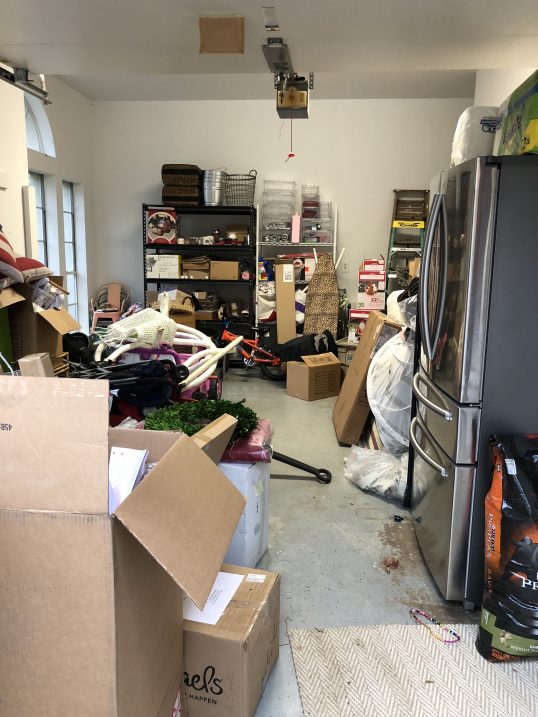 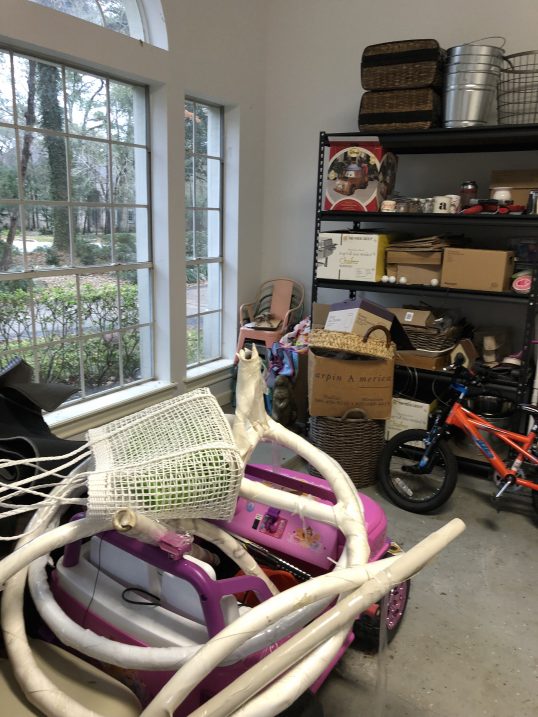 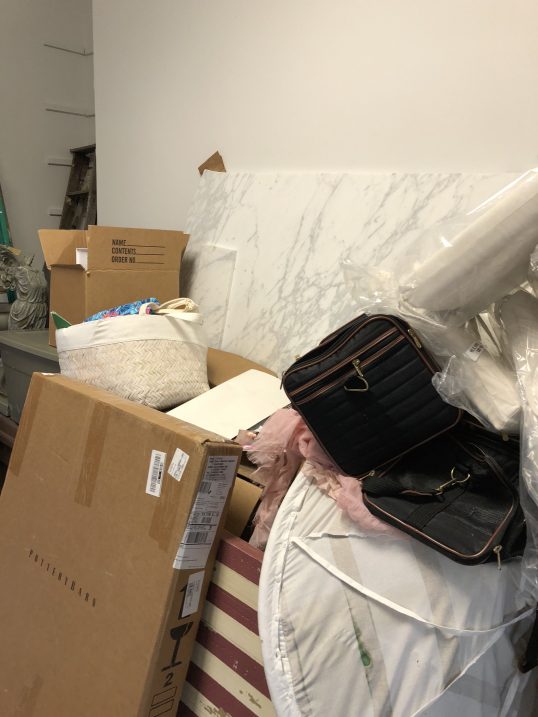 Because Mr. Fancy and I both park in the garage, we wanted to be sure we kept a part of this garage, still a garage. We need the space to house bikes, the extra fridge and things like that. As you can see, there was TONS of stuff in here. Tons that we didn’t need or use. So, again, this was a great purge project as well. One of the main issues we had, was the garage door motor. That had to be changed to a side mounted unit. It was definitely not a cheap thing to do. You’d think something like that would be an easy, cheap fix, but we also had to have the garage for pop up a bit, when it opens, instead of going back, because there was going to be a wall there. So, in turn, that was kind of a pain, but it’s finished and now the wall was able to go up.

Here are a few before pictures with all the garbage gone and the wall up! 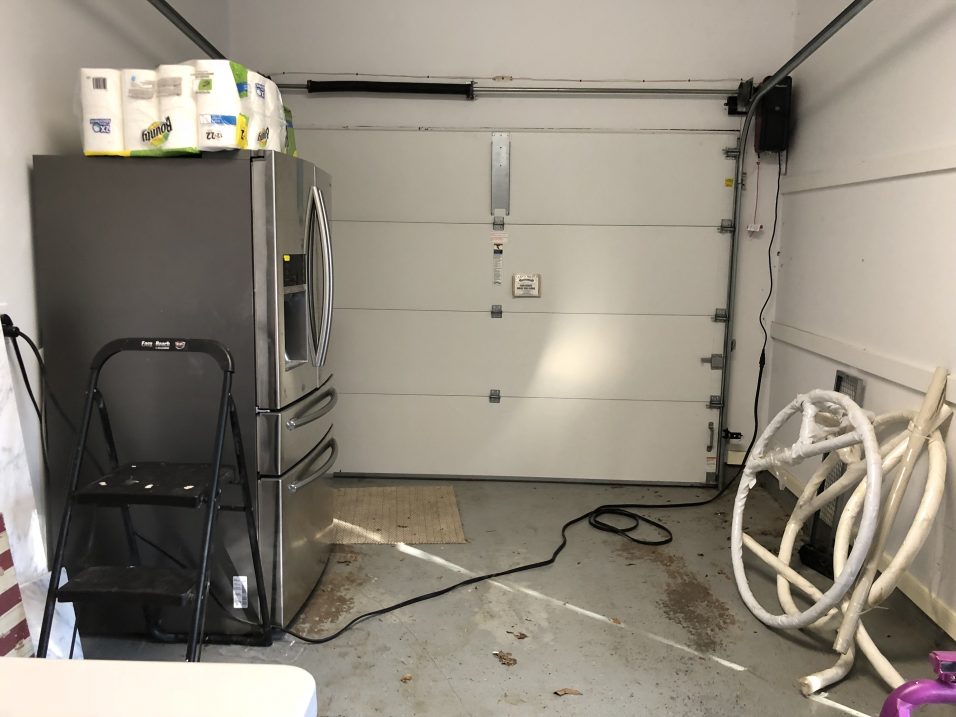 There’s the side mount motor… 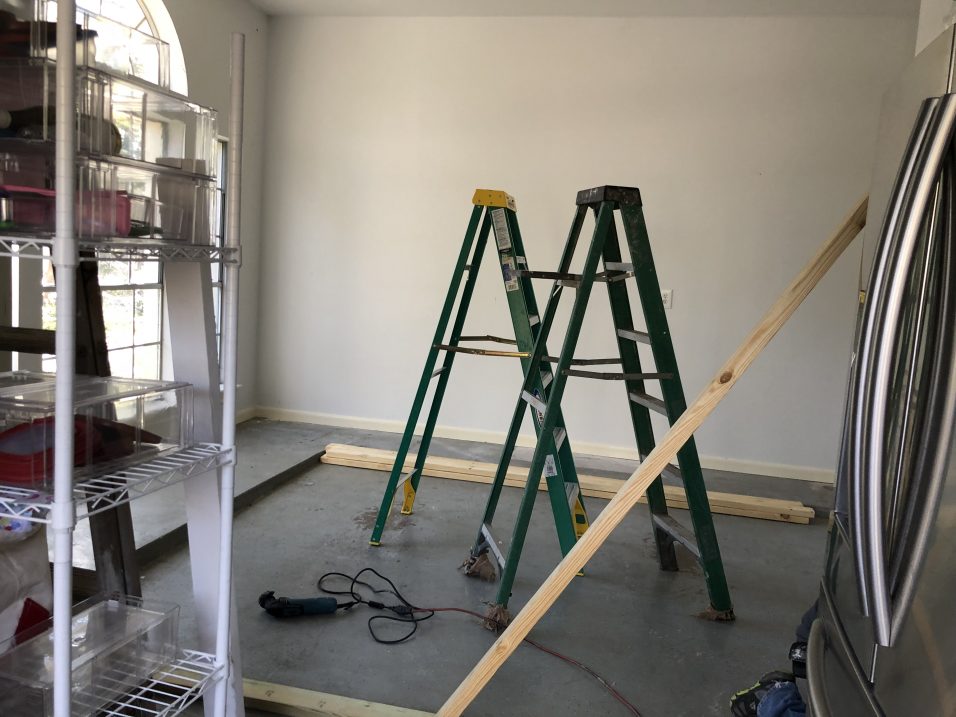 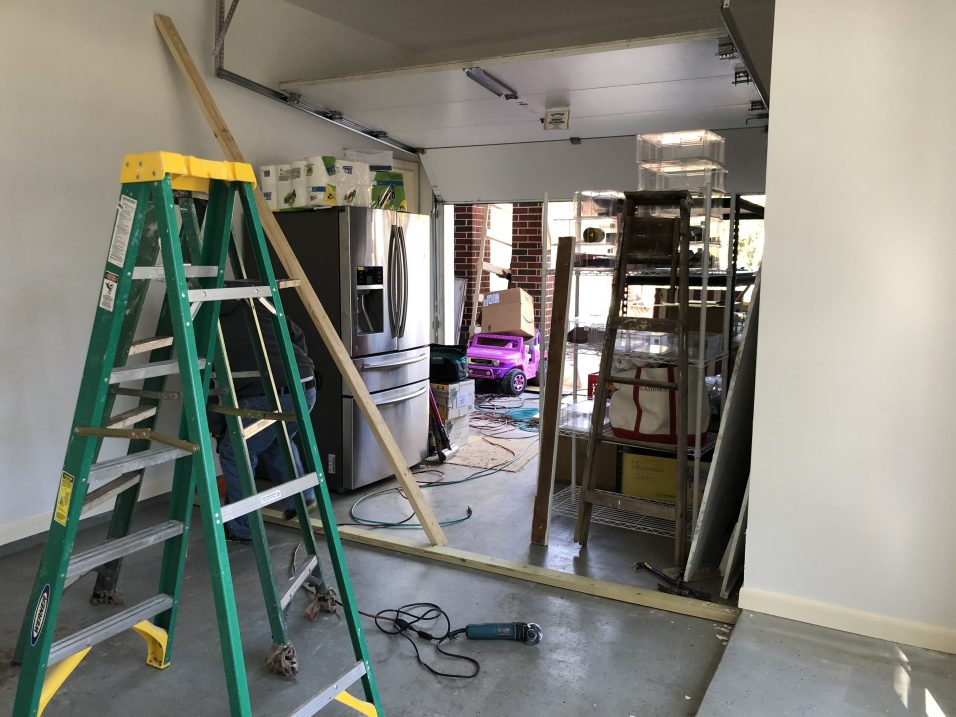 Here’s the room with the wall up. 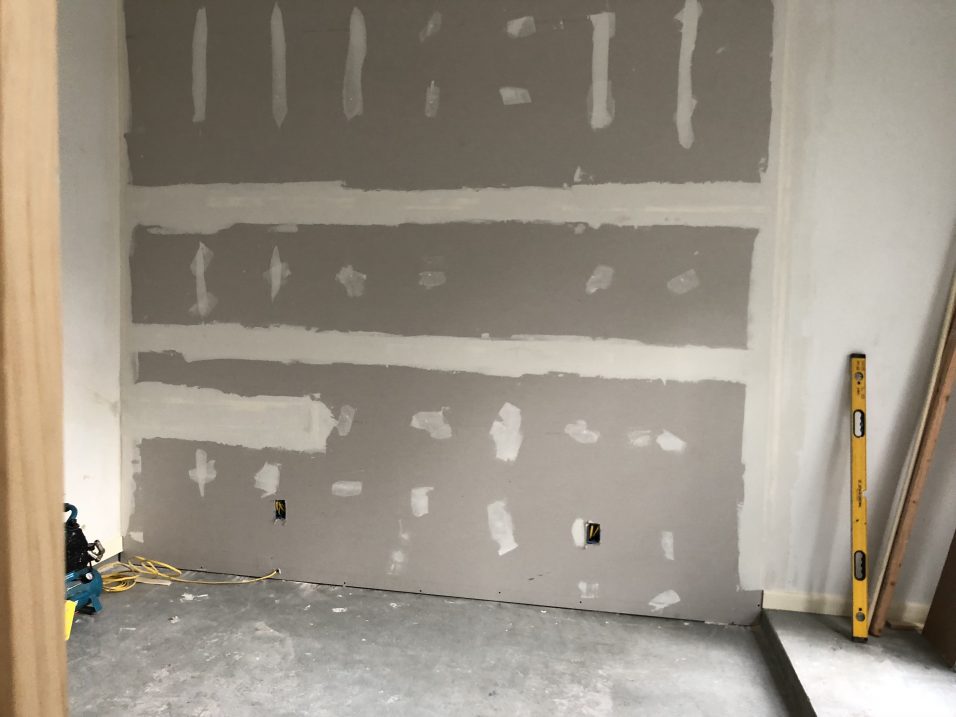 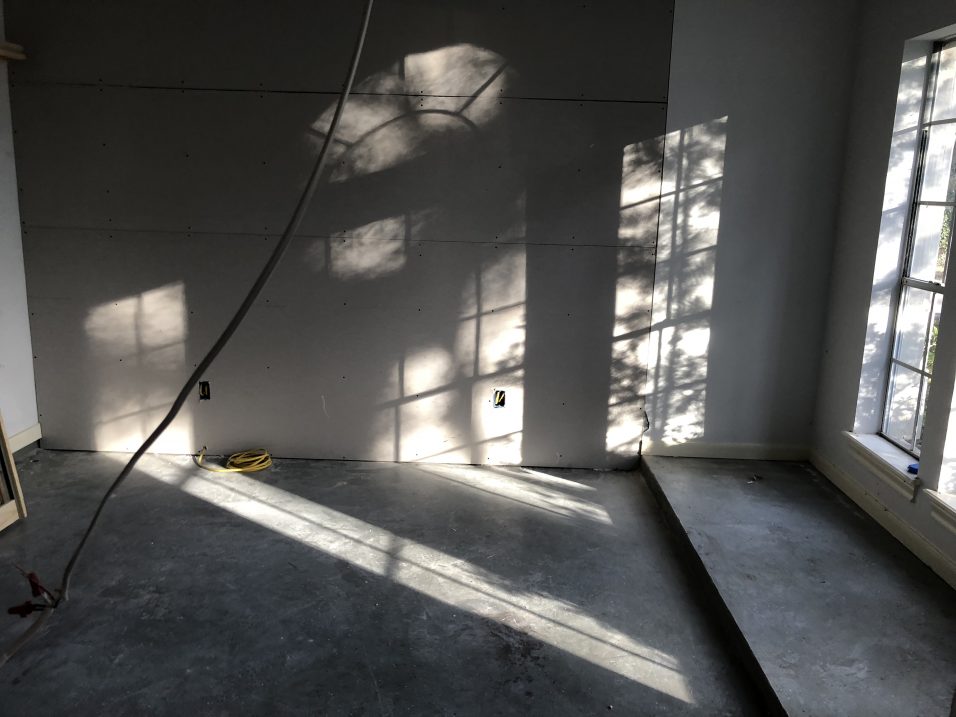 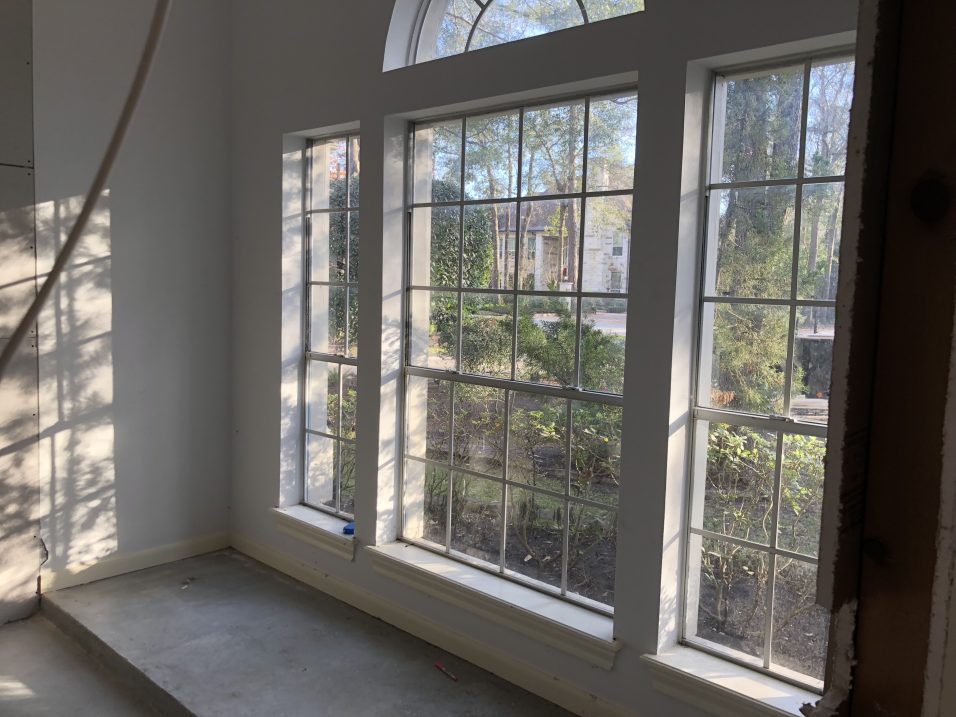 As you can see the floors are different levels. I’m told they did this to keep water out, if the garage ever flooded. So, we also had to bring the ground to the same level. That was done Saturday. This is also a pain and one of those items that adds on to the cost, but it’s a necessary step! Here is a picture with the floors all the same level. 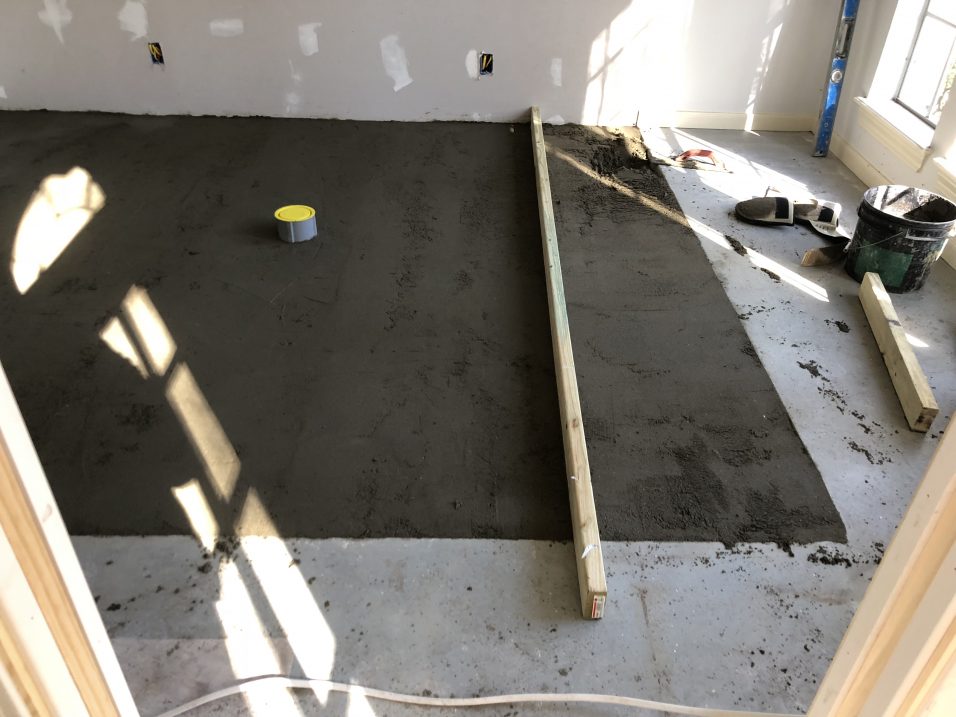 So, that is the before! I am super excited to see it all come together. Cabinets are being built this week offsite. Since this is a smaller project, he can build at his workshop and then just bring them to instal. If everything goes according to plan, cabinets will be installed on Thursday and Friday, along with the shiplap and primer should start Saturday. Then paint early next week, followed by floors! I’ll definitely show you guys the updates when they start happening! Be sure to follow me over on my STORIES for daily updates. See my design plans in THIS POST! Have a great day! XO! 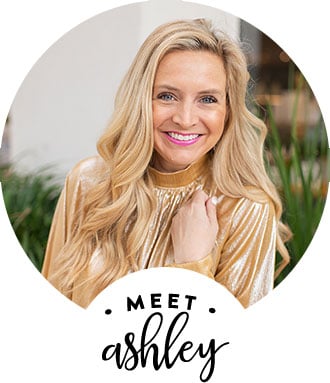